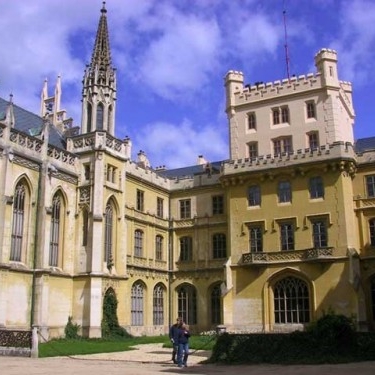 Mikulov is situated in the very heart of a wine region and the chateau on the rock has been a unique dominant of the Mikulov skyline for centuries. The original governor's castle was donated by Přemysl Otakar II in 1249 to the Liechtenstein family as the fief. In late 16th century the new owners of the seat, the Dietrichstein family, had the chateau reconstructed to the present appearance after the fire in 1719. The part of Mikulov adjacent to the chateau hill, since mid. 15th century inhabited by Jewish citizens, developed into a large Jewish ghetto. Lednice is the best-known tourist destination in south Moravia with a Neo-Gothic Chateau and extensive park. All roads in the Chateau Park lead to the Minaret. The gallery, 60 meters high, provides an entrancing view to the countryside. Valtice contains one of the most impressive Baroque residences of Central Europe. It was designed as the seat of the ruling princes of Liechtenstein in the early 18th century. The palace is surrounded by an English park with the Temple of Diana and other neoclassical structures. Together with Lednice, to which it is connected by a 7 km-long lime-tree avenue, Valtice forms the UNESCO World Heritage Site Lednice–Valtice Cultural Landscape.

This full-day trip includes a visit to Mikulov, Lednice and Valtice castles. We can also include a short wine-tasting in Mikulov.

Configure your trip to Lednice, Valtice and Mikulov:

Lednice-Valtice area is a UNESCO site located about 240 km south-east from Prague. It takes about 3 hours to reach Lednice from Prague. 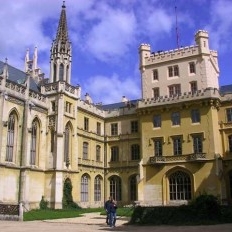 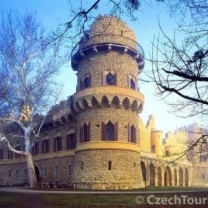 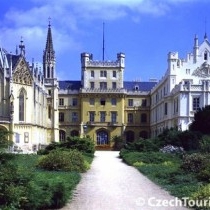 The present appearance of Lednice is a result of the Neo-Gothic reconstruction of 1846 - 1858, designed by Georg Wingelmüller. The ostentatious Baroque riding school edifices, designed by the architect Johann B. Fischer of Erlach have been preserved since the end of the 17th century. There is a green house, built in 1843 - 1845, as per project of P. H. Desvignes, leaning to the manor on the eastern side.

Not far from the Lednice castle, on the left bank of the Dyje river, a wonderful structure, called Januv Hrad, was built after 1801. The project was drafted by the architect, Josef Hardmuth. The exterior of this structure, originally conceived as a hunting lodge, imitates a Medieval ruin, with a touch for romance. The building plan consists of four towers in each corner marking off a square space. The interior of the frontal wing is decorated with ornamental mural paintings and contrast sharply with the object's external appearance.

A perfect frame for the Lednice manor is the French garden and its vast provincial park, one of the largest in the Czech Republic. There are many noteworthy decorative constructions within it, for instance the Temple of the Three Graces, the Temple of Apollon and several other structures. There is a graceful minaret protruding from the rich park green within the sight of the manor. This minaret is a singular architectural monument, constructed based on the design of Josef Hardmuth in 1797 - 1804.

The rooms open to the public in the castle ground floor stand out, namely due to the carved decorations. All the rooms are magnificent, the most magnificent being the library, with its splendid fusiform stairs and imposing entrance hall with beautiful ceilings and lower facings of Turquoise, Red, and Blue Shows.

Lednice-Valtice area is a UNESCO site located about 240 km south-east from Prague. It takes about 3 hours drive to get to Valtice from Prague. 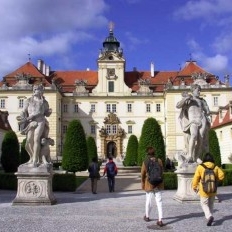 Valtice castle represents an excellent example of Baroque style. In the first quarter of the 18th century the esthetics of the three story manor was overlaid by a more modern form of the top Baroque according to the design of J. B. Fischer from Erlach. His plans were executed by D. Martinelli, after 1713.

The stroll through the Valtice castle is a very pleasant experience. Several rooms and halls display extraordinarily rich decorations of the walls, and its value has not diminished though most of them were radically restored in the second half of the 20th century.

The most beautiful from almost twenty interiors nof Valtice are the Mirror Hall, the picture gallery, the manor chapel and the saloon of Prince Charles. These and a number of other rooms are moreover decorated by magnificent ceiling paintings.

The natural country park built in the 19th century adds charm to Valtice like a similar park by the Lednice castle,
containing numerous precious decorative buildings. In this park at Valtice, you can find a mighty colonnade with Corinthian pillars built in 1832 and the Temple of Diana called also Rendezvous recalling the Roman Victorious Arc (1812).

The whole area is also famous for wine production.

Mikulov is a lovely old town located about 230 km east from Prague and it takes about 3 hours to reach Mikulov from Prague. The main sight-seeing spot is the castle and the whole area is famous for its wine production. 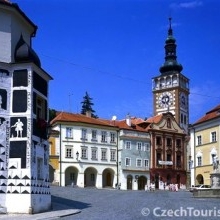 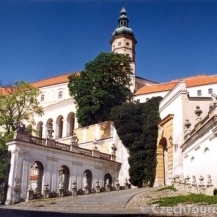 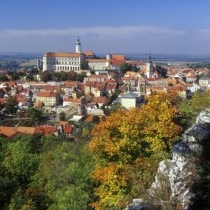 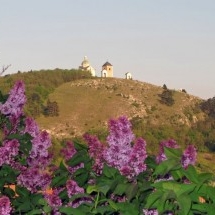 The approach to historical Mikulov from any direction will present you with a unique panorama, the silhouette of the chateau, Holy Hill and the Goat Hill. The medieval historic centre was declared a protected town area in 1952. Dominating the skyline is the Renaissance chateau.

The Regional Museum is located in the chateau and contains valuable collections which can be seen in permanent exhibitions. Of special interest are the Giant Wine Barrel and the wooden beam wine-press in the chateau cellars. Mikulov is the starting point for the instructive wine trail, which takes visitors through Palava and shows them the wine culture and tradition of Mikulov's Wine District.

The most outstanding chapter of Mikulov history was written by its Jewish inhabitants. The sizeable cemetery and other remarkable memorials bear witness to the importance and power of the local Jewish community. This is described on the Instructive Trail in the Jewish Quarter.

One of the biggest Gothic buildings in Mikulov is the collegiate chapter of St.Vaclav Church, St. John the Baptist Church with its impressive interior and frescoes used to be a part of the Piarist high-school complex.Holy Hill - an important place of pilgrimage in the 17th century - is crowned by St. Sebastian Church, the bell-tower and the Chapel of the Way of the Cross.