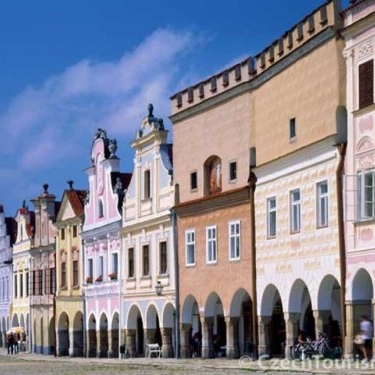 Telc was founded in 13th century as a royal water fort on the crossroads of busy merchant routes between Bohemia, Moravia and Austria. Besides the monumental 17th century Telc castle with an English-style park (a rebuilding of original Gothic castle), the most significant sight is the Telc square, a unique complex of long urban plaza with well-conserved Renaissance and Baroque houses with high gables and arcades with the column of the Virgin and the fountain in the centre of the square. Since 1992 all of this has been a UNESCO World Heritage Site. Telc castle was built in the second half of the 14th century. In the middle of the 16th century the nobleman Zacharias of Hradec had the castle altered in the Renaissance style. The facade is decorated with sgraffito, and the state apartments and living quarters received stucco ornamentation. The counter-reformation brought the Jesuits to the town, who built the church, Name of Jesus, according to the plans of Domenico Orsi.

This tour includes visit to the Telc castle and the Renaissance square of Zacharias z Hradce.

Telc is a town famous for its castle and the historical square which is enscribed in UNESCO World heritage list. The town is located about 140 km south-east from Prague and it takes about 2 hours to reach Telc from Prague by car. 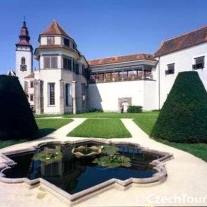 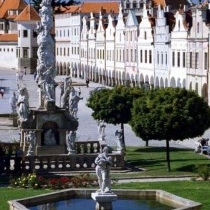 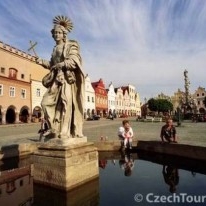 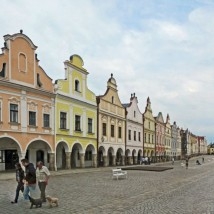 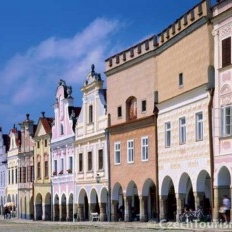 We now know that Telc origins stretch as far back as the turn of the 12th and 13th centuries, when a Slavic settlement appeared on the site of the present town near a ford in the Telc stream. A royal farmstead was situated on a rise above the stream, in the shadow of a Romanesque church and tower. During the 13th century, the settlement developed and in the middle of the 1350's, Telc was legally incorporated and became a town.

The change in statusof Telc inevitably had its effect upon the community's existing design. Between the years 1360-1370, the parish Church of Saint James was constructed in the immediate vicinity of the castle. New fortifications were also built, consisting of stone ramparts, two gates and a system of interconnecting fish ponds encircling and demarcating the entire town. The original Slavic settlement disappeared beneath the ponds and the remaining dwellings outside the city walls formed the basis for Telc future suburbs. The Gothic character of Telc is evident even now and, despite the encroachment of numerous other influences over time, its appearance has never been significantly altered. It represents an exceptionally valuable example of Gothic urban planning from the mid- to late fourteenth century.

The dynamic growth of Telc was halted in 1386 by a fire. As a result, the lord in Hradec was persuaded to confer on Telc its first privilege as a town. The early 15th century, with its economic, social and religious conflicts, was a period of disorder. Several buildings were damaged during a miltary campaign and in the course of disputes between the lords of Telc and the surrounding noblemen. Despite this, in November of 1437 Telc served as a temporary residence for the emperor Sigmund of Luxembourg.

A significant role was played in achieving the town's present architectural cohesion in the late 15th century by Jindrich IV of Hradec, an important figure of the Jagellonian age, an enterprising nobleman and a patron of the arts during the High Gothic period. It is especially thanks to his efforts that examples of the High Gothic arts are manifest in Telc in so many places.

While the years 1535-1555 witnessed a period of reconstruction on the houses of Telc burghers, a new owner soon brought a fundamentaly new and transforming energy to the town. He dramatically renovated and expanded the Telc castle residence in the renaissance style, making it one of the great jewels of renaissance architecture in the Czech lands. The impression created by the fully-preserved palace with its arcaded courtyard and renaissance garden is amplified by the unique furnishings of the interior. The builders and artisans who reconstructed the castle, among them Czech and Italian masters alike, also set to work on transforming the face of the town itself. To the houses on the square an arcade and a new style of gable was added; the original renaissance appearance of most of these houses has been preserved to this day.

In the High Baroque period, represented in Telc by the first half of the 18th century, patrons of the arts included several of the town's wealthier citizens. A column to the Virgin Mary was erected on the square in the center of town during the second decade of the 18th century. Bequests from the merchant Ondrej Hanusik provided for
the construction of the Chapel of the Virgin Mary, a group sculpture of the Holy Family beneath the Upper Gate, and the corridor leading to the parish Church of St. James.

Even the post-war socialist government sought to identity itself with the town's rich historical, artistic and architectural heritage. Its attention focused primarily on the historical core of Telc, that is to say the castle and the houses which surround the square. In 1970 the Ministry of Culture declared this area an Urban Historical Reservation. While the restored monuments were meant to merely support the growth of tourism, they have found themselves the subject and setting of numerous works of graphic art, literature and film as well.

Efforts to preserve the legacy with which we have been entrusted and to nurture the development of tourism are our priorities even at present. Contributing to the achievement of these goals was the inclusion of Telc in 1992 on the prestigious UNESCO World Heritage List of Cultural and Natural Monumnents. Three years later, Telc Castle was declared a National Cultural Monument and Telc Old Town, itself a unique example of folk architecture from the turn of the 18th and 19th centuries together with the Baroque complex of its Church of the Mother of God, its hospital and its Chapel of St. Roche, was declared a historical zone the same year.

This UNESCO town surrounded by ponds and lakes will take your breath away!