Tours outside Prague > Orlík and Zvíkov 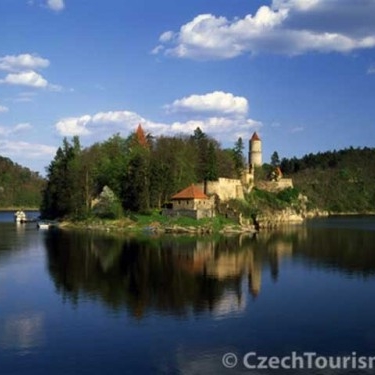 Orlik Castle sits beside the Vltava River on a lush parcel of land that juts out into the water. Built in the 13th Century, the Early Gothic style Orlik Castle underwent major reconstruction in the 19th Century, which resulted in a strange neo-Gothic creation. Orlik was acquired by the Schwarzenberg family in the early 1700s but was confiscated by the communist in the 1940s. Following the end of the Communist Regime the castle reverted back to the Schwarzenbergs. The interior of Orlik Castle was redone in Empire Style and displays armory and the family furnishings. There is also an impressive carved ceiling in the Knights Hall. Zvikov Castle belongs to one of the most important Czech Gothic castles. It towers on a once high rocky promontory over the Vltava and Otava confluence but the valley below the castle was flooded after building the dam so nowadays the castle protrudes above the surface just several meters. Zvikov castle was probably founded by the end of the rule of the king Premysl Otakar I. (died in 1230).

The trip includes visits to Zvikov castle and Orlik castle.

Configure your Orlík and Zvíkov tour:

Orlik is water castle located about 70 km south from Prague. It is almost surrounded by water and woods. It takes about 1.5 hours to reach Orlik from Prague by car. 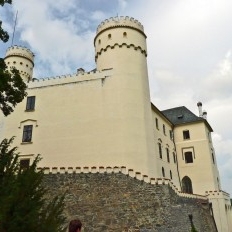 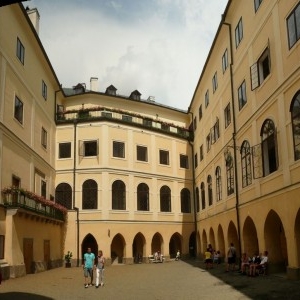 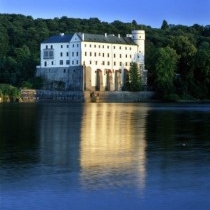 Orlik castle was built in the 13th century. It was remodeled in the years 1849 - 1860 by the architect B. Grueber in the Neo-Gothic style. To the castle belongs Castle Park (180 hectares). The Small Empire Hall, The Big Empire Hall and The Teska-Court are very interesting. In The Small Empire Hall are portraits of The House of Schwarzenberg. In The Big Empire Hall are furnishings from the Napoleon's time. It's the time, when the builder of the junior's line of the family worked as an Austrian ambassador in Paris. In the Teska Court there are magnificent exposition of the Czech wood-carving master Jan Teska and Havana's ceramic tile stove, and collection of weapons with ornamentation, gifts for Napoleon and the Russian czar, and 18 000 books in the library and about 300 valuable's fire-arms.

The last important constructional changes of Orlik castle date from 1849 - 60, when architect B. Grueber gave the facade of Orlik castle its present Neo-Gothic appearance. Later on, the 180-hectare park was finished, which Field-Marshal Karl of Schwarzenberg and his wife Maria Anne started to lay out at the beginning of the 19th century.

In the northwestern direction from the Orlik castle, a family vault was built in 1861 - 64. In 1960, the construction of Orlik Dam was completed, raising the level of the River Vltava by about 60 metres, which altered the scenery of the whole area. The castle which was originally built on a high rock has been turned into a water castle almost surrounded by water.

Zvikov is an old water castle located about 130 km south from Prague. It takes about 1.5 hours to get to Zvikov from Prague by car. 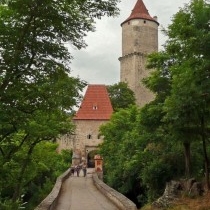 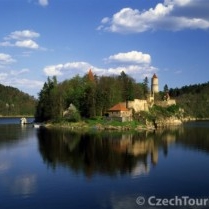 Czech King Wenceslas I built this Royal gothic castle in 1234 on a hill towering over the confluence of Vltava and Otava rivers. Major building was done by the son of King Wenceslas I, King Premysl Otakar II. (also called the King of gold and iron). It was he who added a four-wing huge Gothic palace to the Zvikov castle with an irregular layout, unusual for that time. On the ground and first floors, the wings are connected by arcade passages with circular windows facing the courtyard.

The Zvikov Castle has been used for the filming of many movies. The communists dammed up the river, so the Zvikov castle is much closer to the water then when it was originally built.