Enjoy a unique historic experience in a modern European city during our Prague city tours. The Old Town of Prague is well preserved and the whole center is inscribed in UNESCO. You can choose the Prague city tour that suits you the best from the list below. We will gladly adjust any tour according to your wish.

The tours are entitled only to you. These are not multilingual public tours.
The rates are per vehicle not per person. 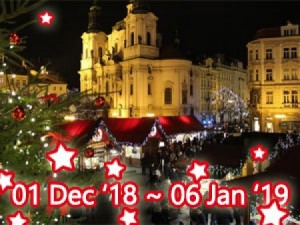 Experience the Christmas atmosphere in the magical Prague during the special time of Christmas. Prague Christmas markets were chosen #1 by USA Today. 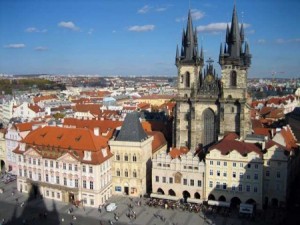 Prague is one of the most beautiful cities in Europe. This half-day tour will briefly show you the most important sightseeing spots: Prague castle, Charles bridge and Old Town. 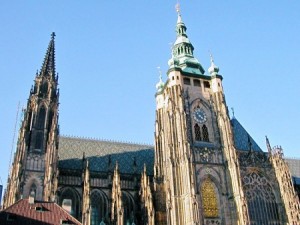 Explore one of the most romantic cities in Europe in detail during our full-day tour! We will show you the Prague castle, Charles bridge, The Old Town, The Municipal house and Vysehrad church. 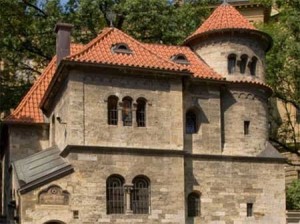 The Prague Jewish Town is one of the most unique, preserved Jewish neighborhoods in Central Europe. The Jewish cemetery and spectacular synagogues survived even the Nazi occupation of Prague!

Prague (or Praha in Czech), the capital of Czech Republic, also called The Pearl Among Cities, Mother of Towns or City of One Hundred Spires is an excellent choice for your trip to Central Europe. As this most famous Czech attraction was mostly spared of bombings during the World War II, the whole historical city center is well preserved and inscribed in the UNESCO World Heritage list. While Prague offers a unique historic experience during the romantic walks through the Old Town, it also offers the comfort of a modern European city with good infrastructure and services of hotels of all classes and restaurants of both local and international cuisine. Prague is also a famous cultural center and you can spend hours in its galleries and museums, at concerts and other cultural events. 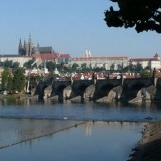 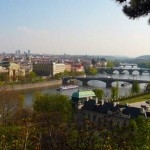 One cannot help but be stunned by the beauty of the contrasting yet harmonic architecture of Prague. Gothic cathedrals rub shoulder with Renaissance mansions, synagogues, Baroque churches, Cubist buildings and Art Nouveau palaces. Prague is the capital of Czech Republic, and it is one of the most valuable historical city reserves. In 1992, the historical core of the city covering 866 hectares was inscribed in the UNESCO World Cultural and Natural Heritage Register.

For a great selection of places to stay with discount prices visit Prague Hotels for more information.

For more info on the iconic Czech artist Alphonse Mucha, check out his dedicated page on Artsy. 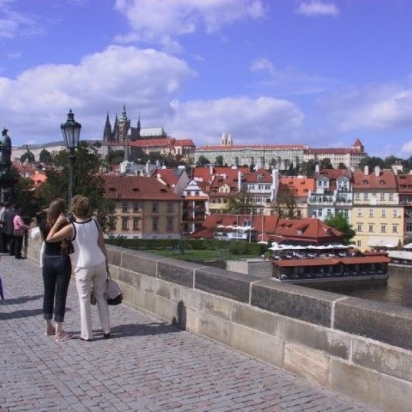 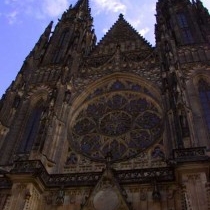 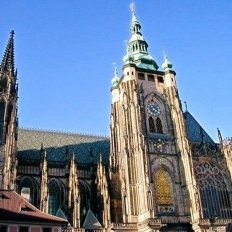 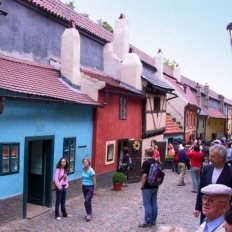 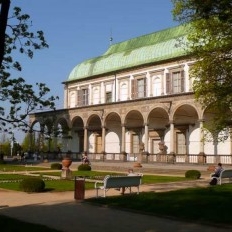 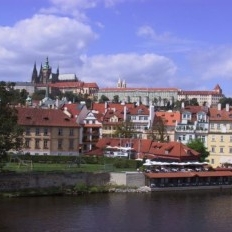 The castle was established in the 9th century, and a Romanesque palace was erected in the 12th century. It was rebuilt in the Gothic style under the reign of Charles IV in the 14th century. The final reconstruction of the Royal palace took place at the end of the 15th century, and at that time the builder Benedikt Rejt added the now-famous Vladislav Hall, also in the Gothic style. The castle was enlarged in the 16th century, after a big fire in 1541. The Spanish Hall, was added in the reign of Rudolf II, and it took its final form in the time of Empress Maria Theresa, under the direction of the architect M. Pacassi. After World War I the interior and gardens of the castle were renovated by the architect J. Plecnik. Now, the castle serves as the seat for te president of the Czech Republic.

The most visited parts of Prague castle are The Old Royal Palace (the old residence of Czech kings, built in the 16th century), St.Vitus cathedral (the spiritual symbol of the Czech state. Its construction started in 1344 and was finished in 1929), the Golden Lane (small houses incorporated in the Gothic fortifications in the beginning of 20th century), Basilica of St.George (hosting the 19th century art exhibition of The Czech National Gallery) and the castle gardens. We can adjust the length of our Prague city tour so that you can see and visit all Prague castle attractions you are interested in.

Built in 1357 on the site of the Judita Most (Judith Bridge), an earlier construction that was washed away in one of the city's frequent floods, the Charles Bridge (or Karluv most in Czech) is the most familiar and enduring symbol of Prague and was the only bridge across the Vltava river until the nineteenth century. Inspired by the Pont Neuf in Paris, Emperor Charles IV commissioned a bridge designed to withstand the elements, consulting astrologers as to when to begin construction and mixing eggs with the mortar for added strength. The Charles bridge is must point for every Prague city tour. 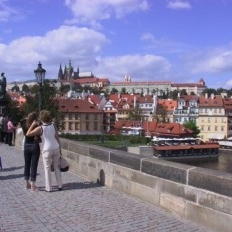 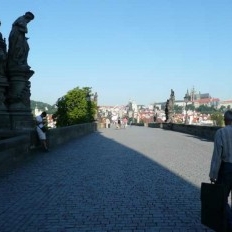 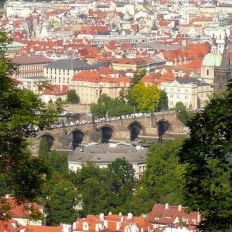 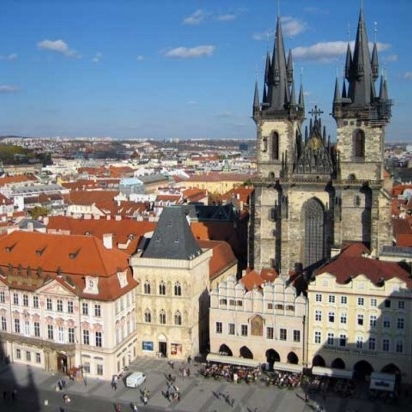 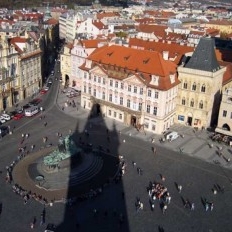 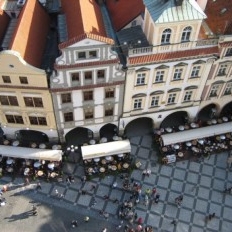 The heart of medieval Prague, the Old Town Square has its origins in the 12th century and has witnessed many of the city's momentous events. It is surrounded by examples of beautiful architecture from various ages with many buildings having been added to over the years; a baroque or Renaissance facade may hide a Gothic or Romanesque cellar below. Free of traffic, it is a natural meeting place and attracts stallholders and entertainers who provide a carnival atmosphere every day. It also an excellent place to take a short break during our Prague city tour to buy souveniers. 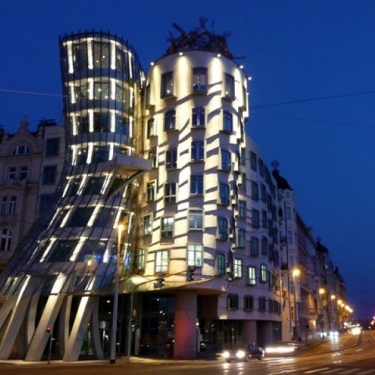 Situated on the banks of the Vltava River and a short walk from the metro, the Dancing House (Tancici dum in Czech), built by Frank Gehry and Vlado Milunic for the Netherlands Insurance Company, was opened in 1995. Please note, the building is not accessible for public. If you are interested in inovative moder architecture, we recommend to at least pass by the Dancing House during the Prague city tour. 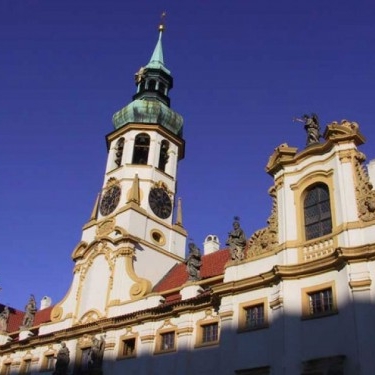 This former place of pilgrimage with the copy of Santa Casa was built in 1626-31, and the Baroque Church of the Nativity of Our Lord was added in 1734-35. The facade of the front wing was rebuilt by K. I. Dienzenhofer in 1720-22. The tower contains 27 loretto bells which play a Marian song We Greet You a Thousand Times (every hour from 8 a.m. to 6 p.m.).The most valuable item of the liturgical treasury is the so-called Prague Sun, a monstrance weighing over 12 kg and embellished with 6 222 diamonds.

The Municipal House and the Powder Tower 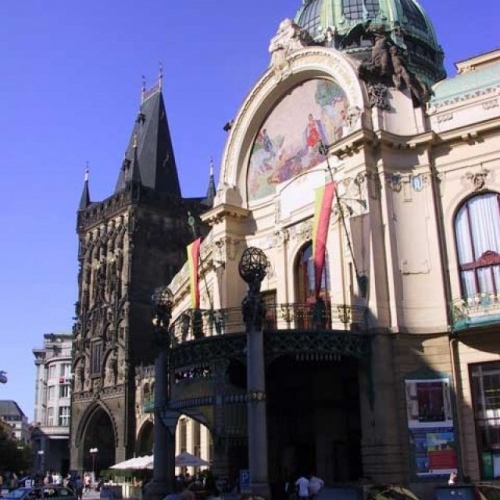 The Municipal house (called Obecni dum in Czech) and the Powder tower (Prasna brana in Czech) is a unique harmony of architectural and painting styles of the turn of the 19th and 20th centuries. Neo-Baroque, Neo-Renaissance, and both Western and Oriental influences fuse together with Czech Art Nouveau. The impression Municipal House gives is enhanced by a wide range of decorative styles and materials, as well as by the high quality of craftmanship. The monumental appearance of the building is crowned by the outstanding decor created by most of the prominent Czech artists of the day, namely the painters Mikolas Ales, Vaclav Jansa, Alfons Mucha, Max Svabinsky, and the sculptors Josef Vaclav Myslbek, Karel Novak and Frantisek Uprka. The opening concert of the famous Prague Spring music festival takes place in Smetana hall inside Municipal House. 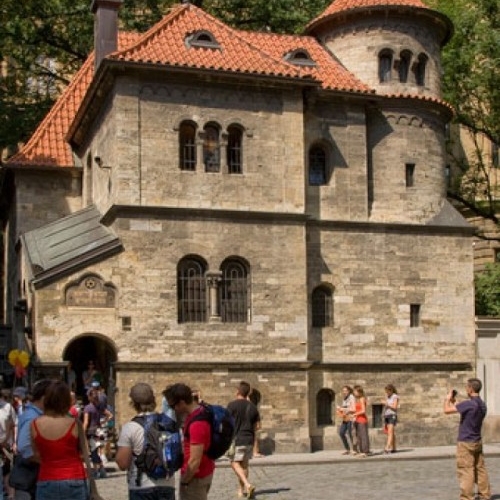 The Prague Jewish Quarter dates back to the thirteenth century, but due to intensive development between 1893 and 1913 only a few significant buildings remain. Despite the destruction of what had been the Jewish ghetto to provide space for some of the Prague's notable art-nouveau buildings, it is still an outstandingly beautiful area with the best collection of Jewish historical monuments in Europe, including the Jewish Town Hall, Old Jewish Cemetery and a number of superbly preserved or restored synagogues.

A stone-throw-away from the Prague Castle, the Petrin hill is perfect for a summer walk away from the tourist bustle. Part of the land is set aside for apple and pear orchard from which the fruit can be freely picked of the trees. The observation tower and a manicured garden dominate the summit. Don’t forget the hall of mirrors for a new and varied perspective of yourself - also on the summit. 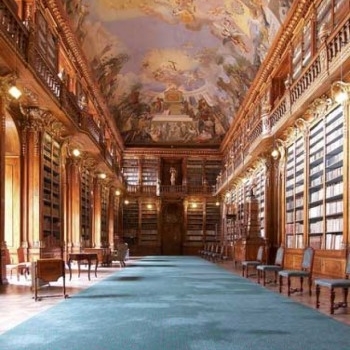 The Royal Canonry of Premonstratensians at Strahov, also known as the Strahov monastery (Stahovsky klaster in Czech) is one of the oldest monasteries of the Premonstratensian Order in the world. It has been a working monastery practically ever since it was founded in 1143. Fire, the Hussite Wars, religious wars, and the Communists all failed to shut down this institution. Besides its spiritual services and abbey life, Strahov Abbey also plays a role in the cultural life of society. The famous Strahov original historic library and the newly reopened Strahov Picture Gallery attract more and more visitors every year.

The infant Jesus of Prague 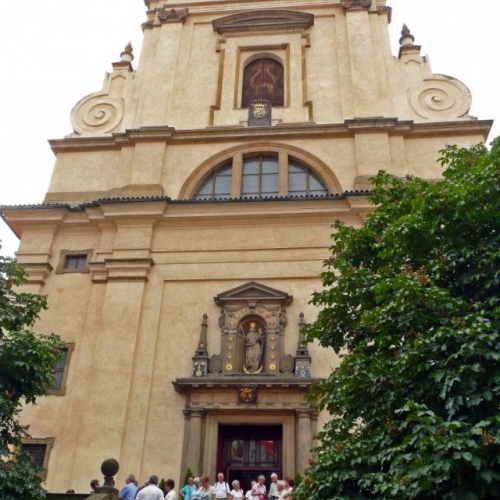 The cult of the Childhood Jesus's linked to the Baroque period. During this period the Child Jesus plays the main part. In the year 1631 the Saxons invaded Prague and the plundering did not bypass the monastery. The sculpture of the Child Jesus was thrown out with the waste and damaged. Later, Prague citizens gathered some money for repairing the broken arms. The Infant Jesus thus became again the object of worship and a number of miracles were linked to the statue. The wax figure is 47 cm High. It is protected from damage by a silver casing, that reaches to the waist. The Infant Jesus was always dressed. There have been more than 70 dresses donated. The oldest well-preserved ones are from 1700. One is donated by the Empress Mary Theresa. Dresses come as gifts from all the world. 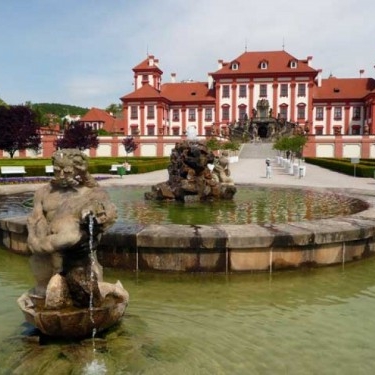 A vast complex of buildings and gardens built by J. B. Mathey 1679 - 1685. The core of the complex is the main three-wing building with a great hall. The murals in the hall are the work of A. Godin and his son Isaac. The grand garden staircase is decorated by sculptures depicting gods and goddesses fighting the Titans, work of Dresden sculptors J. J. and P. Herrmann. 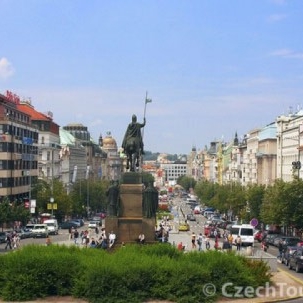 Originally a horse market laid out by Emperor Charles IV in 1348, Wenceslas Square (Vaclavske namesti in Czech) was renamed in 1848 to honour one of Prague's two patron saints and martyrs. Measuring 750 metres (820 yards) in length by 60 metres (65 yards) wide, it is more of a boulevard than a square and is lined with hotels, restaurants and exclusive shops; a microcosm of the best and worst of twentieth-century architecture and the city's free-market post-communist legacy. The Wenceslas Square witnessed many important movements and events in the modern Czech history, like the demonstrations during the Velvet Reovolution in 1989 when the Communist regime had been overthrown.

Museums and galleries in Prague

Opera and concert halls in Prague